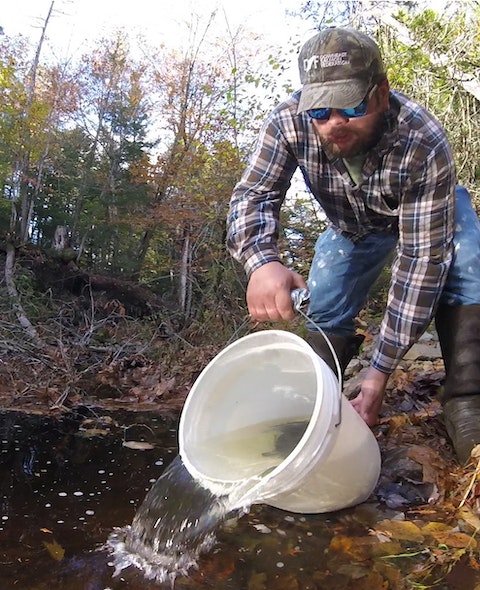 Peter Gray Parr Project Technician Alex Frank releases Atlantic salmon parr into the East Machias River last fall. The project, implemented by the Downeast Salmon Federation, closely mimics the way juvenile salmon, known as parr, are raised in the wild. A decade of data shows that the project increases the survival rate of adult salmon, which in turn increases the fish’s chance of returning to the East Machias to spawn. The project was recently awarded a $770,000 grant to continue the work and expand it to the Narraguagus River. Downeast Salmon Federation photo.
EAST MACHIAS — Bolstered by a recent federal grant, the Peter Gray Parr Project continues its work to restore the Atlantic salmon in Maine waters.

The species remains endangered in the United States and according to National Oceanic and Atmospheric Administration (NOAA) Fisheries, “the last wild populations of U.S. Atlantic salmon are found in at least eight rivers in Maine.”

The Peter Gray Parr Project closely mimics the way juvenile salmon, known as parr, which are older and bigger than fry, are raised in the wild. It has been used by the Downeast Salmon Federation (DSF) to stock the East Machias River with parr for the last 10 years.

It has been so successful that it is garnering national recognition and was featured on CNN’s “Call to Earth,” which reports on environmental challenges and solutions.

Additionally, a federal grant to the tune of $770,000 was just awarded to DSF so the organization can continue its work on the East Machias for the next five years and expand the project to the Narraguagus River, DSF Executive Director Dwayne Shaw told The American.

The grant will not be distributed until DSF provides matching funds.

The Peter Gray Parr Project, named for the late hatchery manager who developed the method, is showing that by raising salmon as if they were in the wild, the adult salmon return from the sea to spawn at up to 14 times the rate of fish raised and stocked using other hatchery techniques.

That increases the odds that adult salmon return to the East Machias to spawn and hopefully develop a self-sustaining population that does not require hatchery interference, Shaw said.

He also noted that the fish raised using the Peter Gray method are practically identical to their wild counterparts.

The project, which made its way to Maine waters from the United Kingdom through a partnership with the North Atlantic Salmon Fund in Iceland, has largely been funded through private donors, Shaw explained.

He said DSF is the only nongovernmental organization in the United States that has the necessary permits to raise endangered Atlantic salmon outside of governmental operations.

After a decade of promising results, Shaw said federal agencies are finding that the method “is an effective way of recovering Atlantic salmon,” and are working to form public/private partnerships to facilitate the repopulation efforts.

The agencies working with DSF include NOAA, the U.S. Fish and Wildlife Service and the Maine Department of Marine Resources.

The method was first developed in the 1980s by the late Peter Gray, who implemented the method on the River Tyne in northeast England.

His goal was to help save the species, which was endangered in the United Kingdom at the time.

“The River Tyne is one of the greatest success stories in salmon recovery worldwide,” Shaw said.

Since Gray implemented his method for hatching and raising salmon, the river’s recreational economy has thrived, with thousands of fish being caught each year, fishing clubs established and employment available for outdoor guides, Shaw reported.

The rebound comes after the species was nearly extinct in the 1960s.

A Dec. 8, 2011, article in the Bangor Daily News covered Gray’s visit to DSF, where he shared tips and insight for effectively implementing the method.

The way it works

The process begins with DSF receiving salmon eggs from the Craig Brook National Fish Hatchery in Orland at its own streamside hatchery.

“That’s the first element of [the process] that’s different. We’re pulling water from the river itself,” Shaw said.

He explained that the eggs are specific to the distinct fish population that live in the East Machias Watershed.

Once the fish are hatched sometime in April, they swim out of the incubators on their own and then are raised in very dark tanks. The darkness, along with an accelerated water flow, replicate “the wild conditions” salmon would normally be raised in, Shaw said.

Then in October, the fish are released one by one, with the help of volunteers, into the East Machias River, where they will live for two years before migrating to the Atlantic off Greenland to mature for about two years.

Each fish is marked by clipping the adipose fin, which helps track the fish when they (hopefully) come back to the river to spawn as adults.

While the project is currently being implemented in the East Machias, with plans to expand to the Narraguagus, Shaw said the Union River could also be home to the promising method.

“The model developing here would be directly applicable to the recovery of salmon on the Union once the fish passage issues are remedied,” he said.

Black Bear Hydro, the energy company that operates both the Graham Lake and Ellsworth dams, is in the process of renewing its federal license to operate the dams.

More information on the salmon project can be found on mainesalmonrivers.org.